why write about Marquis de Sade? the words “sadism” and “sadist” are derived from his name,thats why. 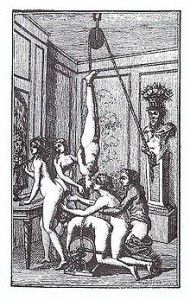 have a look at the artwork ive posted. is that not a beautiful scene right there! i know it excites me.. id love to be the woman that is tied down myself!

Sade was incarcerated in various prisons and in an insane asylum for about 32 years of his life. Many of his works were written in prison.

Sade’s fiction has been tagged under many different titles, including pornography, Gothic, and baroque. Sade’s most famous books are often classified not as Gothic but as a libertine novlel, and include the novels Justine, or the Misfortunes of Virtue; Juliettet; The 120 Days of Sodomm; and Philosophy in the Bedroom. These works challenge perceptions of sexuality, religion, law, age, and gender in ways that Sade would argue are incompatible with the supernatural. The issues of sexual violence, sadomasochism, and pedophilia stunned even those contemporaries of Sade who were quite familiar with the dark themes of the Gothic novel during its popularity in the late 18th century. Suffering is the primary rule, as in these novels one must often decide between sympathizing with the torturer or the victim. While these works focus on the dark side of human nature, the magic and phantasmagoria that dominates the Gothic is noticeably absent and is the primary reason these works are not considered to fit the genre.

Though much of the fiction written by the Marquis de Sade has been classified as libertine, his tales in The Crimes of Love utilize Gothic conventions. Subtitled “Heroic and Tragic Tales”, Sade combines romance and horror, employing several Gothic tropes for dramatic purposes. There is blood, banditi, corpses and, of course, insatiable lust. Compared to works like Justine, here Sade is relatively tame, as overt eroticism and torture is subtracted for a more psychological approach. It is the impact of sadism instead of acts of sadism itself that emerge in this work, unlike the aggressive and rapacious approach in his libertine work]

“To enlighten mankind and improve its morals is the only lesson which we offer in this story. In reading it, may the world discover how great is the peril which follows the footsteps of those who will stop at nothing to satisfy their desires.”

Descriptions in Justine seem to anticipate Radcliffe’s scenery in Mysteries of Udolpho and the vaults in The Italian, but, unlike these stories, there is no escape for Sade’s virtuous heroine, Justine. Unlike the milder Gothic fiction of Radcliffe, Sade’s horror ends in sodomy, rape or torture. To have a character like Justine, who is stripped without ceremony and bound to a wheel for fondling and thrashing, would be unthinkable in the domestic Gothic fiction written for the bourgeoisie. Sade even contrives a kind of affection between Justine and her tormentors, suggesting shades of masochism in his heroine.

Sadism in the Gothic novel

Despite the strong adverse reaction to Sade’s work and Sade’s own disassociation from the Gothic novel, the similarities between the fiction of sadism and the Gothic novel were much closer than many of its readers or providers even realized. After the controversy surrounding Matthew Lewis’ The Monk, Minerva Press released The New Monk as a supposed indictment of a wholly immoral book. It features the sadistic Mrs. Rod, whose boarding school for young women becomes a torture chamber equipped with its own “flogging-room”. Ironically, The New Monk wound up increasing the level of cruelty, but as a parody of the genre, it illuminates the link between sadism and the Gothic novel.

lastly……………………… this icon still rocks even from the other side! There have been many and varied references to the Marquis de Sade in popular culture, including fictional works and biographies. The eponym of the psychological and subcultural term sadism, his name is used variously to evoke sexual violenc, licentiousness and freedom of speech. In modern culture his works are simultaneously viewed as masterful analyses of how power and economics work, and as erotica. Sade’s sexually explicit works were a medium for the articulation of the corrupt and hypocritical values of the elite in his society, which caused him to become imprisoned. He thus became a symbol of the artist’s struggle with the censor. Sade’s use of pornographic devices to create provocative works that subvert the prevailing moral values of his time inspired many other artists in a variety of media. The cruelties depicted in his works gave rise to the concept of sadism. Sade’s works have to this day been kept alive by artists and intellectuals because they espouse a philosophy of extreme individualism that became reality in the economic liberalism of the following centuries.